Menu
Install the app
You are using an out of date browser. It may not display this or other websites correctly.
You should upgrade or use an alternative browser.
Welcome to NZ Beekeepers+
Would you like to join the rest of our members? Feel free to sign up today.
Sign up
B

if you are interested, I can tell you about my beekeeping.
I have a multi-body system for 1/2 dadan. 8 frames in 1 case.
I keep a buckfast bee and a carnic.
Every bee has its drawbacks, and buckfast has such a bad reception of larvae
for education. ( compared to other breeds I've worked with) I am working with the starter application.
For grafting, I use a homemade 0.8 mm wide spatula and a microscope. The real quality begins with a larva that is less than 12 hours old
I give the load to the colony - educator of 16 larvae.
This year I have mastered artificial insemination. The percentage of those who died was about 10%, the remaining ones feel well and work hard. This year I inseminated about 10 queens, but using different dosages of sperm and the multiplicity of insemination, I mastered the technology.
Reactions: Trevor Gillbanks, Grant and yesbut
B 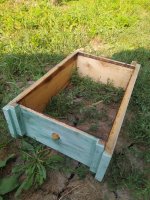 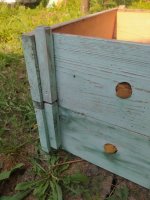 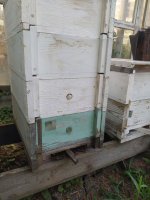 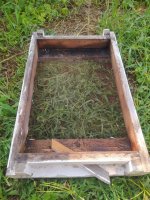 Now a little bit about the hive itself. The design was invented by two Ukrainian beekeepers-Mikhail Polivoda and Konstantin Lezin. It is also called "horned" because of the protruding horns above the body. The hive is fingerless. For its production, a minimum set of tools and carpentry skills is required. At first, it was made even from an unstressed board. No milling work. the joints between the housings are closed by horns. the board is 25 mm thick. From one cubic meter of wood, 100 cases are obtained. In my opinion, the design turned out to be just great. There are examples of making such beehives from plywood on the Internet. For better preservation of the material, they can be boiled in paraffin or oil. I just have them covered with water-based paint and have been working for 5-6 years. I hope you were interested
Reactions: kaihoka
B

recently, beehives made of expanded polystyrene and polyurethane foam have been gaining popularity. The tree recedes into the background
Last edited: Aug 9, 2021

I like your locking box system. Very clever
B

A way to introduce new queens into the hive.
These methods are the most proven in practice and the percentage of successfully implemented queens is almost 100% . No method will give you 100% results, because we work with living organisms.
The first and most important rule is no young larvae in the Hive. There should be no eggs and larvae of three days ' age in the colony. ( this is the maximum period from which the bees can bring out a replacement for the queen) And no matter how great your new queen is, bees will always prefer to derive a new queen from their genetics. There are of course tricks when you take an old queen from the hive, and immediately give a young new one, but for this you need a strong flow of nectar into the hive. Or the replacement of queens in early spring or autumn, when there are very few broods in the colony.
So, the classic way.
We find the old queen, kill her. And we leave the orphaned colony for 6 days. On the 6th day, we open the hive and remove all the queen cells that appeared on the frames. You can shake off the bee to make it easier to watch. And we leave the new queen in a cage for a day in the colony. The next day, carefully release the queen on the frame and watch the reaction of the bees. Ideally, they should make way around the queen with the sun. There should be no aggression. (gently release the queen from the cage, without bumps and pushes. Ideally, she should leave the cage by herself. Inseminated queens lose weight very quickly and can fly perfectly) Next, carefully put the frame back into the hive and after 10-15 minutes, monitor the situation again. If there is no fight, then congratulations, your queen is accepted. After 3-4 days, check how the uterus sows eggs.
This method is good if you know when the queen will come to you exactly on time and you can prepare for it
The second method according to Grandpa Ruttner
Take two cases and a small grid, through which the bee can not pass.
In the lower case, you kill the queen. Looking for frames with a brood that has already begun to be born and transfer their upper body without bees!! Only the frames. . There you also add frames with honey and empty frames filled with water. We put a grid on the lower case from above and put the second case. In the second case, there should be no cracks and open holes. You release a new queen on the frame and close the hive. A young bee will never harm the queen. After 7 days, remove the queen cells in the lower case and combine the cases by removing the grid. At the top, the queen will already have a retinue of bees, and the warm air that will go through the grid from the lower family will not let them freeze. In this way, you can introduce special-value queens.
And there is an express method.
We take an empty hive. We put honey frames and empty ones with water there. We take the donor hive and take the frames from the nest where the young bee is located. We shake the bee into a new hive and hang the cage with the queen. We are closing the hive. We take it to the side or take it to another base. The old bee will fly away and we don't need it. The next day, we release the queen and watch how her reception goes in the first version. After a couple of days, we check for eggs, let them disperse a little and you can force a sealed brood from other families that is already being born. We force it until the new hive gains strength.
Reactions: Trevor Gillbanks
Share:
Facebook Twitter Pinterest WhatsApp Email Share Link