Load of package bees ready to be delivered 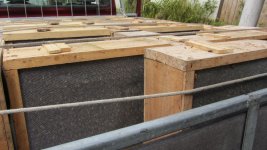 Alastair said:
Load of package bees ready to be delivered
Click to expand...

I was falsely under the impression that NZ only exported packages of bees (websites, trademe, advertising etc). These sorts of numbers must be going commercial? Or do you supply local hobby beeks too?
Reactions: Dansar

Mostly right Josh, the bee sales market in NZ has mostly been filled by nucs, packages has not been done much internally.

But part of my own early background was selling bees to Canada and (in those days) Iran, before politics messed that up. I like doing packages and am good at it.

After a bad autumn requiring me to do a lot of rescue work through winter the bees came through super strong this spring, so yes I'm selling. To commercials and hobbyists. Commercials for example a queen breeder who is using them to stock mating nucs, and a manuka producer who is using them to quickly boost weaker colonies so they are strong early to get a manuka crop. Also some people with hives damaged over winter by oxalic staples or whatever to bring struggling hives back.

I sell to hobbyists also which seems to be mostly so they can use them set up new hives.

I'm fully committed for now won't be doing any more this spring.

here's a video of how packages are made by a team. The part not shown in this video is the first bit, where boxes of dry combs are put over an excluder, then the bees are smoked and drummed up into it with a rubber hammer. Now I'm a one man band I do it by finding the queen then shaking the bees from the brood boxes.

Been a crappy old day here,which was taken advantage of by moving bees into pollination and onto some willow sites.
There's always a catch though .......
160 virgins hatching out and looking for paradise.
They never found it.
Reactions: Josh

Josh said:
I was falsely under the impression that NZ only exported packages of bees (websites, trademe, advertising etc). These sorts of numbers must be going commercial? Or do you supply local hobby beeks too?
Click to expand...

There has been quite a shift is recent years to adopt some of the lesser known facets of beekeeping to generate an income that we used to read about only on international sites. Eg Virgin queens, Package bees etc.
I remember emailing Arataki 12 or so years ago asking if they sold package bees as I was wanting to populate my first hive (top bar hive). After many months of no reply Russel sent me a message saying “sorry, no, only export sales.”
Nowadays I shake my own bees out to populate mini mating nucs. Great for swarm control too.
Reactions: Josh, CHCHPaul, Mark Lawrence and 2 others

As James says… it’s a crappy old day here. Two in a row, in fact. Giving me time to look at the forum. 🤗

This spring has been outstanding so far down here, touch wood. Hives are boosting beautifully with some pretty spectacular nectar flows filling honey boxes. Queen cell production is high and, as soon as this weather clears, I’ll be checking mating success… ready to start sending girls on over night couriers.

About to get the old sewing machine out to stitch the second round of staples together. And I’ve run out of gear again, so need to wax more frames and assemble boxes… in between swarm prevention and chatting with farmers.