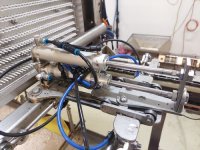 last season we found we would have jams caused by frames sticking together. wooden frames being the worse and even if separated when loaded they tend to stick back together when on the conveyor. when the separator pulls them apart it tended to fire them off at high speed, causing the frame to wobble and pickup would miss.

you will have to excuse the hack install job as this is in testing, proper install is later. hopefully peter will whip us up some proper brackets.

so this is simply an air cylinder rigged up as a speed control/shock absorber and mounted on top.
the bottom one does the separating as per normal, the top one controls the speed. so regardless of what the bottom one does, or load its under, the speed remains pretty consistent.
we have run a few hundred boxes through with no problems. including 100 wooden ones that we did not separate the frames. it had no issues separating the stuck together frames.
this does not mean it can handle bridging. while bridging on the top bar is ok, bridging on the bottom bar will cause the frame to swing and miss pickup.
also i modded the indexer and changed the 'blade' profile to help it avoid hitting frames behind (due to plastic frames bending) and help it cut through any top bar bridging.
note: we run 90 psi air pressure not the usual 120 psi.
i was concerned it might struggle to separate the frames at the lower pressure but that doesn't appear to be the case.