how have you guys fixed this ? 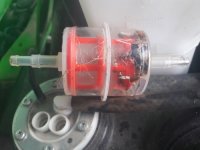 our avant conked out the other day in the yard. that goodness it wasn't at night shifting bees !

found the culprit, a fuel filter with a bit of diesel bug in it.
now the catch is someone has installed it before the fuel pump. it was rolling around in the crap on the bottom. so obviously not OEM.
however the agents/dealer tells me its factory. however the avant has a factory mounted main filter and a separate water trap with pre filter.
both of which are absolutely useless because this added filter does the job for them. so its the one that clogs up and its buried down the bottom where you have to take several panels off to get to it. try doing that in the field at night. where as the factory water trap and pre filter is accessible at the top and doesn't need tools.

pretty obvious dealer or agent is talking crap and they probably added the extra filter because they had fuel pump failures. that would not be to surprising as the pump is a good location where water will sit inside it and diesel bug will clog it.

has any one sorted out a proper fix for these machines?

I don't know about your machine, But I used to have no end of trouble with the fuel bug in a truck I owned. I ended up installing a Racor sediment filter as the first filter in the line...and my troubles ceased. Along with treating the fuel for the algae.

Gordie said:
I don't know about your machine, But I used to have no end of trouble with the fuel bug in a truck I owned. I ended up installing a Racor sediment filter as the first filter in the line...and my troubles ceased. Along with treating the fuel for the algae.
Click to expand...

this has that as per stock. but this extra filter is before that. so its a pre-pre-filter
i would recommend the sediment filter with farm vehicles or any vehicles that sits around for 6 months doing nothing.

The Racor filter I had was quite a large capacity one, whereas that filter you pictured looks quite small. A big filter would be more forgiving of a bit of clogging. That little one looks like a waste of time, considering that it is located before the pre filter!

The racor also has a centrifugal sort of action, so throws a lot of sediment into the sight glass below the filter element, which you can drain periodically.

Yep, didn't even take vehicles that sat around to get the 'bug', could 'catch' it from contaminated fueling sources. Until I installed that Racor, I could be cruising along the highway and then without warning, starve of fuel and come to a halt.

Oh and re treating the bug, back in the 90's there was a product from Canada called 'Power Up' which made a fuel treatment for the bug. It worked beautifully. I have searched in recent years, and not found it, but surely someone makes a similar product.

Gordie said:
didn't even take vehicles that sat around to get the 'bug', could 'catch' it from contaminated fueling sources.
Click to expand...

farm tanks are bad for that.

Gordie said:
Oh and re treating the bug, back in the 90's there was a product from Canada called 'Power Up' which made a fuel treatment for the bug. It worked beautifully. I have searched in recent years, and not found it, but surely someone makes a similar product.
Click to expand...

yes, we have a similar product. threw some treatment in.


the catch 22 of having the extra filter in this case, is that it traps water and gives the bug a place to grow (the bug grows on the boundary of the water and diesel). being down at the bottom you can't see it, while the factory one remains clean and clear.
J 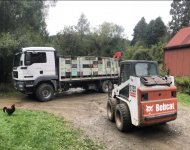 Bobby BobCat does all our lifting... filled from the 40yo underground bulk tank.
Never had issues with dirty fuel or bugs.
Last edited by a moderator: Mar 12, 2021
Reactions: tristan

just an update on this.
i pulled the fuel system to bits and re routed it.
so now the fuel flow goes from tank, to primer bulb, to stock pre-filter, to pump, to main filter, to injection pump.
that little addon petrol filter they claim is "stock" is now in the bin.
didn't need any extra hose, in fact had some left over.

so now the pre filter water trap does what its meant to do. the primer is there to help prime it should you have to empty/clean it.
however one issue is the primer becomes a water trap (major issue) or an air trap (not a big issue) depending on how it sits. so i have it horizontal facing back. so if you go up a hill (like onto a trailer) any water will go down and out, and into the pre filter.
one thing i havn't done is change the bleed screw to a tool less setup. at the moment you still need a screw driver to undo it. i may cut a slot in it so it can be opened with a hive tool.
the pre filter is the only filter that you can get access to without needing screw drivers to get panels off. also you can get it apart to clean it without special tools. ie now its the one thats going to block up if there is crap in the fuel and its the one you can actually service in the field.

the electric fuel pump actually sucks pretty well. so if you have issues priming (as the primer bulb is up top where you can actually get to it), just turn the ignition on and run the pump as well as use the primer bulb.
Reactions: James
Share:
Facebook Twitter Pinterest WhatsApp Email Share Link