Historic: Looking back in time: the NZ Beekeeper magazine...

Menu
Install the app
You are using an out of date browser. It may not display this or other websites correctly.
You should upgrade or use an alternative browser.
Welcome to NZ Beekeepers+
Would you like to join the rest of our members? Feel free to sign up today.
Sign up
Here's a fun exercise, that can sometimes lead to a better understanding of NZ's beekeeping history...

Think about the date of your own birth. Mine was in May 1951 (albeit not in NZ!)

And then find the NZ Beekeeper magazine that is closest to that date (until the 1990s, there were only 4 issues per year) - mine was, in fact, May 1951.

So what was happening in the beekeeping industry back then? First I looked to the list of Executive and branch contacts. I see the names of people who would be known to me in the NZ beekeeping industry about a quarter of a century later (I arrived in NZ in 1974). Names like Bill Haines, Jim Barber, Tom Penrose, Peter Pegram, Percy Berry, Dudley Lorimer and Bob Davidson. Each of these from the May 1951 magazine would still be significant forces of the industry when I was first involved in the middle 1970s.

The lead editorial was calling for higher honey prices - to be secured through an application for price increase, as selling prices were tightly regulated at the time. The argument was that beekeepers were spending more to operate their hives than they were receiving as income!

Dudley Ward, later a very well respected NBA President in the early 1990s, had a half page advertisement for hive parts that he sold from Dannevirke. And Percy Berry had a full page advertisement for Arataki Queens, at this time consisting of Percy and son Ian Berry. The branch events reported are always fun to read, especially if you can spot some of the 'beekeeping family' names that have stayed active in the industry over generations...

And if I had to characterise the 'issue of the day' for May 1951? I'd say it was related to the efforts of the NBA and what was then the Honey Marketing Committee to achieve a regulatory price rise for honey (while also knowing that the two boards did not really see eye to eye...)

But I think I've got a 'not so interesting' birthdate issue. I happen to know that the formation of the Honey Marketing Authority was only a short time into the future. The HMA was the predominant influence on the marketing of honey in New Zealand until its dissolution in the early 1980s. The demise of the HMA led to the creation of the Honey Co-op that was to trade successfully for many years. The funds available when the HMA was dissolved would ultimately for the origins of the Honey Industry Trusts, still a significant funder of projects for the good of the NZ beekeeping industry. Now, any one of *those* events would make for a more interesting issue of the NZ Beekeeper to read and enjoy!

Here are two pages with some interesting commentary about manuka honey... 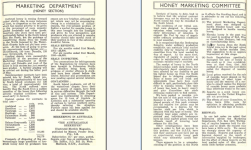