Menu
Install the app
You are using an out of date browser. It may not display this or other websites correctly.
You should upgrade or use an alternative browser.
Welcome to NZ Beekeepers+
Would you like to join the rest of our members? Feel free to sign up today.
Sign up
N

I believe NZ may have pioneered the use of hot paraffin wax dipping for boxes. Initially, it appeared to have been for preservation, but at some point, the application as a tool to sterilise boxes was made. I'm not exactly sure when that was, but by 1950 for sure, the Dept of Ag recommended paraffin dipping for AFB sterilisation.

I just came across this early 1930 reference in The NZ Honey Producer. That monthly magazine was around for several years, self-published by W.B. "Billy" Bray - grandfather of Peter Bray. Billy started Airborne - from memory it was 1910?

So in 1930 Billy Bray travelled up through the North Island and variously visited beekeepers and sold his own honey. He recorded this bit about his visit to Allan Bates, a Taranaki beekeeper. 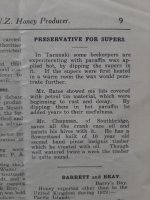