especially when its the forklift doing the smoking.
the forklift let the smoke out his week. sparky mate in to repair. pulled the main loom out and cut out melted wires.
we actually got lucky, the ignition switch plug melted and came apart stopping it.
very lucky the whole thing didn't go up in flames.

we found the main power feed had rubbed through under the dash. trace it back and found no fuses in the circuit, despite the circuit diagram in the manual showing a fuse. looks like the China factory took short cuts. it was also wired a bit odd. normally it would be wired straight back to battery, but this was wired to starter motor on the other side of the forklift. ie it would have used less cable, cheaper, to wire it normally.
so sparky mate wired it "normally" and fitted fuses on both main feeds. we are not actually sure what the other main feed is being used for. 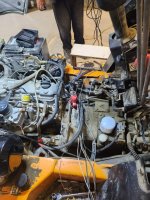 So annoying to see these type shortcuts taken, to save a few cents on something worth thousands.

See this type stuff all the time, especially some products out of China.
Reactions: tristan

actually there another story in there.
the LPG system was installed (i assume kiwi installer) with minimal vac tube used. so it was tight, so tight it eventually broke the end off and it wouldn't run on lpg. to short to bodgy it back on.
so of course old boy didn't bother getting that fixed straight away and ran it on petrol. thats ok until he filled it up using an old diesel container. truck arrives for pickup and forklift conks out due to the contaminated fuel.
two fuel system neither working.