My advice for what it’s worth would be if you were going to try a new treatment for the first time to do so in the spring when the colony is in the growth phase.
Much more forgiving during this phase for obvious reasons.
I have again wintered over a couple hundred hives with ox, bees have come through very clean, but.. they hit autumn clean after ox goes in at harvest sometime in Jan.
blindly adding ox to a colony following a summer with no treatment, at a time when colony population is in the declining phase could have dissapointment written all over it.
Last edited: Sep 26, 2021
Reactions: Fieldbee (Mary), CHCHPaul, Josh and 1 other person

stoney said:
blindly adding ox to a colony following a summer with no treatment, at a time when colony population is in the declining phase could have dissapointment written all over it.
Click to expand...

Wonder if that was my problem
Reactions: frazzledfozzle

Freeload all you like. Many of us here were early adopters, or in the conversation from the beginning. I rate them highly. My only word of warning is to be consistent with your timing as, realistically, they only last six to ten weeks.

tommy dave said:
i've been lucky so far to not have experienced strips failing to work. Touch wood. I got lucky and dodged the bad batch a few years ago, and might also be lucky re apiary location and proximity of beekeepers constantly exposing varroa to low (sub-lethal?) doses. Only strips I have used are bayvarol, apivar, and apitraz. I had a less successful experience with a gel treatment, i think it was apilife var a few years back, salvaged with strips.

I think this year is the year I finally trial oxalic/glycerine strips as an early autumn treatment - the hard work figuring out mix and medium has been done by a number of people, i do feel like a bit of a freeloader on this front.. many of us here we
Click to expand...

Just put my second graft for the season into the incubator and the cells are looking great. 33/33 and looking large 🤗 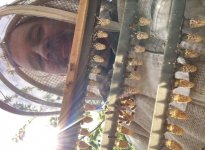 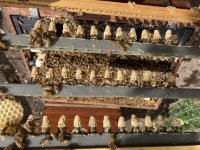 Reactions: James, Dansar, southbee and 2 others

4 weeks ago we found a hive on its last legs. It had chomped through most its winter feed by early July sometime and had received a dry sugar feed to tide them over until I was back from other work duties to deal with the apiary. They got a small feed of syrup by less experienced staff early August and I caught up with them for varroa treatments at the end of August. Ideally they should have had a top feeder put on and received a bulk feed.
Anyway the result we came across was the typical last gasp of what was a big colony with most dead out front and on the floor.
There was about 4 frames of sad bees and the queen remaining alive (just alive), so…..
Reduced it to one box, gave them syrup in the internal frame feeder and I poured a bit over the bees to encourage grooming and incidental feeding.
Checked them yesterday. All alive.
Boosted back up with 4 frames of capped brood and attached nurse bees plus a frame of pollen, honey and attached bees all from several colonies. Smoked the beejeezus out of them to mask pheromones.
Added more feed (2.5 litres) 1/2 a Megabee pollen substitute and another brood box. Happy beekeeper happy bees.
Back in a week to put a top feeder on that I never seem to have on the Ute🤣
Yes! they survived! 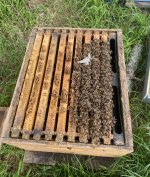 Spread the frames ready for some reinforcements 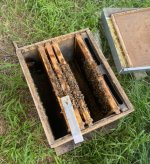 Boosted ready to expand with 4 frames of capped brood included 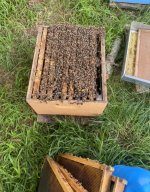 Nice! Always a great pleasure to bring one back from near death
S

CHCHPaul said:
Just put my second graft for the season into the incubator and the cells are looking great. 33/33 and looking large 🤗

Just put my next lot in as well. Fingers crossed me too!