southbee said:
Maybe just try and make some candles and don't worry about the colour as of yet. It'll be good enough for candles for yourself and friends and even if you sell them, some people actually do like the different colour ranges in the beeswax we found. Candle making is a lot of fun and you got the wax, I wouldn't over think it.
Click to expand...

You are a wealth of encouragement Southbee, I'm going to take your advice .
Reactions: southbee

Trevor Gillbanks said:
I was going to upload some photos but the new programme will not accept my photos (too large). Also will not go into the media section. Sorry.
Click to expand...

Trevor I would highly recommend a program to you called Irfan View.

It is free, and the easiest ever photo editing program you could ever come across. Unlike many free programs it does not contain spyware or any other nasties. It is highly recommended by reputable computer publications such as ComputerWorld.

The guy who writes and updates it distributes several million copies a month for free. Out of those millions, some people give him a donation, and he is able to live well.
Reactions: Fieldbee (Mary) and Trevor Gillbanks

Alastair said:
Trevor I would highly recommend a program to you called Irfan View.
Click to expand...

+1
i've been using it over 20 years now.
Reactions: Alastair

I made an interesting discovery about the colour of the wax. Most of the wax I have taken from the solar melter is from black comb and is darker than I consider attractive for decorative things like candles.

I have refined it by melting in a pot over water and the dirty stuff goes to the bottom and can be scraped off. However the wax itself has still remained dark.

Last night though I made a discovery, through what was nearly a disaster but I was saved by our smoke detector .

I had some wax that was melted down several times till it no longer had any "dirt" on the bottom of it. But it was still unpleasantly dark. So last night I melted it down in a pot with some water so it could be poured into molds. But left the element on high, then got distracted by a phone call.

Next thing there is 2 smoke alarms going off, I charge into the kitchen and find the pot boiling, with steam impregnated wax foaming right up to the top of the pot, overflowing onto the element and smoke everywhere 😵.

Just Thank God it did not burst into flames!!

Anyhow took it off the heat, and it settled down. This morning I tipped the now hard plug of wax out, there was fine dirt type stuff under the plug which scraped off easy, and the wax itself is now a lovely yellow.

I can only assume the water thoroughly mixing and foaming with the wax has caught a lot of the micro particles of dark matter, and taken them out of the wax and settled on the bottom. This was material that would not come out just by melting the wax.

However although the wax now looks good, I did read an article by NZBeeswax once that wax should not be melted with water, because it hydrogenates it. So if that's the case my wax will be hydrogenated. But, it does look good.

However I do not want to repeat this rather dangerous procedure, I would love to know how people like NZBeeswax get their wax lovely and clean and yellow.
Reactions: Fieldbee (Mary) and CHCHPaul

If bleached, it could be expected to go paler. But it's a nice bright yellow, pretty sure all that's happened is brown nasties have been extracted from the wax 🙂
S

Value-added products from beekeeping. Chapter 4.http://www.fao.org › ...
Some interesting information in these articles, but I don't bother with any bleaching. Maybe grating it and leaving it in the sun would work for you?
Reactions: Alastair

very fine filter?
If you find out how- please tell.

but what is hydrogenated wax and why is it bad?
I have seen both advice to boil wax and to not boil it.

This, from the web sit of NZBeeswax -

There are a few basic points to follow when melting as detailed below. Another point that you should note is that quality is not just based on how clean your beeswax is. Every time you melt beeswax you reduce the quality, so try to get it right the first time. For many of our uses we would prefer once melted beeswax with some bees in it and dross on the bottom, than the same beeswax which has been re-melted.

We’re still melting out cappings wax
Comes out of the water jacketed melter.
The first few runs are Cow honey.
Then comes the good stuff, run into moulds with a little water inthe bottom. 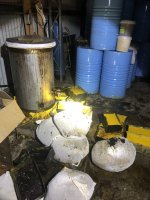 Mummzie said:
I have tried cotton cloth (pillow cases) as filters, works ok but leaves a lot of wax in the cloth and clogs up. Not much fun to sleep on after either. Muslin is too open. Paper towels absorb too much wax. There is a reasonably fine nylon insect cloth available at hardware stores that with multiple layers makes a reasonable filter, and with a bit of a rub releases the crud- making it re-usable.
I was starting to play with dacron wadding (quilt inners) but I think we ran out of summer, got locked down and haven't gone back to it.
I will be very interested in anything you find works.
Click to expand...

Try pantyhose. You can cut can probably cut them to suit your melter & wax mould. Find some elderly person that still wears them or in may case, I have just come to a ten year end of a pantyhose inheritance from my mum!

Mutton cloth out of the wax melter room is good. If you don't have access to this, go to the supermarket and look in the dish cloth section and you will prob find this cloth sold in a little clear plastic packet. They don't label it as mutton cloth, but that's what it is.

Would not pantyhose melt?

Maggie said:
Mutton cloth out of the wax melter room is good. If you don't have access to this, go to the supermarket and look in the dish cloth section and you will prob find this cloth sold in a little clear plastic packet. They don't label it as mutton cloth, but that's what it is.
Click to expand...

Mitre 10 sell packs with a good quantity in it, in the paint section.

Alastair said:
Would not pantyhose melt?
Click to expand...

At home, I have a solar melter, and that is fine for all my burr comb and any bits of wax. Last time I traded it, there was over a 100 kg of wax acceptable, and that wasn't just one year's lot. I use 2L ice cream containers as moulds. So I can get the wax out easily, I lightly grease the mould with a bit of kremalta on kitchen paper. 500 g of kremalta has lasted me 20 years & still going! I use the kremalta, cos when i started out, as a hobbyist, that was recommended for greasing tins when making candles.

If melter honey is in the base of the mould, I just put it through the next day.

I would have preferred if the wax melter would take a queen excluder, but this is what I inherited when I bought some gear. So I only melt wax in February/March and it suits outside during the day on the concrete when we get 30 plus temps, and it's pretty quick melting in those temps on the concrete. The ice cream container has a little wedge under it to tilt the container. The mesh gets put in the log burner to clean the mesh. There is a little hook inside the top of the melter to hold the mesh basket in place, which I thread a strand of mesh through.

But the cappings from honey extraction, go through the commercial wax melter. You wouldn't do big amounts as above, but the concept is still an option for a hobbyist. And also give an idea to a hobbyist as to what they might or might not want and make their design accordingly.

Wax from brood combs will always be darker than cappings wax. Darker pressing wax is fine for foundation except thin super for comb honey. When dealing with dark wax the longer you can leave it to settle (ideally more than 24 hours) the better quality it will be. I know some foundation makers used to use diatomaceous earth to settle some of the fines out but I don't know if this is still used.
Pressing wax smells fine to me even when burnt in a candle but if you are doing a big melt out do not use any old wax that has got wet and smelly because that smell will never go away and will taint the whole batch.
A lot of the old time beekeepers used to use beeswax as a sort of bank and would store several years of production until they had a really bad season and needed some extra cash. Solar melters are not that efficient at removing wax from old combs but then they are not as expensive to run. Slum gum from wax pressing is fantastic for your garden , making compost or as a mulch around trees. It is high in nitrogen and will compost to very high temperatures. Don't put too deep a layer of fresh slum gum around trees or vegetables or it can heat up enough to cook the plants.
Reactions: CHCHPaul, Trevor Gillbanks, NickWallingford and 1 other person


Maggie said:
that is fine for all my burr comb and any bits of wax.
Click to expand...

As in, pantyhose is fine?

Also, I'm familiar with how the commercial setups work, it's trying to downsize it to the few dozen kg's I'm dealing with now is the tricky part.

Alastair said:
As in, pantyhose is fine?
Click to expand...

Yep, the photo shows a some maroon pantyhose. Think I better launch into the mead instead of typing about pantyhose.
Reactions: Rob McInnes and Alastair

Oh, is that a bit of panyhose stretched across the bottom of the tray?

Looks like a fine melter you have there .
Reactions: James

Gosh James made me realise that came across all wrong, one of those times I wish the edit function lasted a bit longer.

Anyhow, the candle molds I ordered arrived today so I gave it a shot, rather pleased with my first effort if I say so myself 🙂

Also, not badly coloured wax considering it came from the blackest most evil old brood comb that exists 🙂 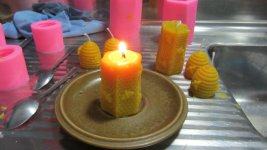